...about the Lady Grey coat process that is. Last night I garnered up my best fitting efforts, and cut into the shell fabric. 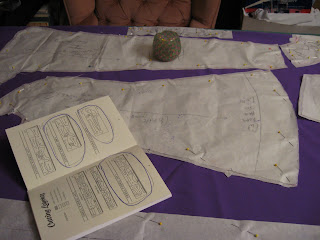 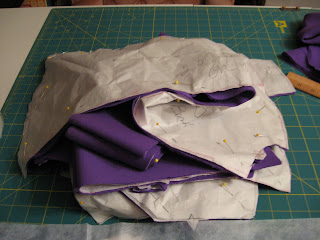 and that's that. It is what it is!, or should I say "it will be what it's gonna to be". I had already decided that more than enough money has been invested in this project, so I opted against the hair canvas. None was to be found in my area anyway, maybe next time - because I've got to move on.

I also started working on a little tailoring of the front of the coat. I'm following along with the sew along suggestions as closely as possible. I know my coat probably will not be as firm because of the type interfacing I am using, but that's o.k., since I really want a soft structured garment. Since I've read so much on tailoring recently, and Gertie has taken her time to provided the how-to video tutorials, I think it's time that I tried my hand at the stitching. I know I'll be using this information on many future projects since I so dearly love jackets.

Here's a picture of what I've done so far. I'll pad stitch the side front sections and the lapel next. Couldn't find any silk thread in my area either, so I'm using a "fine" thread in a matching color.
Can you see my stitches? 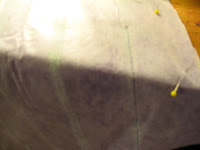 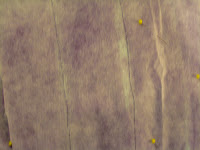 I still have not committed to do bound buttonholes yet. I sort of think I will, sort of think I won't at the moment. (I know, I'm still being a little wishy washy.) I have until it's time to attach the front facing to make up my mind. I want to see if I can find some time to practice with them before I mentally commit...
at October 12, 2010