On Saturday I worked on this dress that I had started the week before. Although the SPRING MONTH OF TOPS officially started on April 1st, I have this UNWRITTEN RULE that I must try my best to complete anything that I've already started before embarking on a new project. So I finished what started out a wearable muslin late Saturday afternoon AFTER A THIRD ATTEMPT TO HEM IT. That's right three hems! There was something really different with this knit that I couldn't get a decent hem - the stitching was just wonky. I even tried doing a zigzag hem and it was wonky too. So after talking with my friend Lisa, I took her advise and used Steam-A-Seam Lite and then got a perfect hem.

Like I said, initially, this was to be a wearable muslin just to try the pattern out before using it on some of my Vogue fabric that I picked up at the sewing expo last month. Well, that will never happen with this pattern. Although I call myself an advanced beginner, I had the hardest time deciphering the pattern instructions. The instructions for the tucks/pleats just didn't make sense. I ended up JUST DOING IT MY WAY, and making up my own directions. Although I was able to produce a wearable muslin - suitable for a run to the store, a shopping trip, or maybe even a back yard cookout, I will not be making this pattern again. 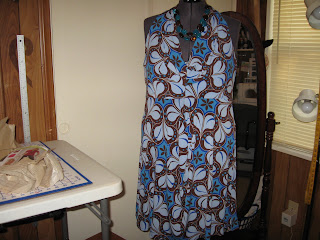 This is a picture of my first Spring Month of Tops project. It's made from McCall's 5884, a pattern I bought last year but never got around to making up. I used a piece of fabric from the scrap box that I made a top from last summer. Since that top was gifted to one of my Sisters, I thought I'd make up another style for myself. 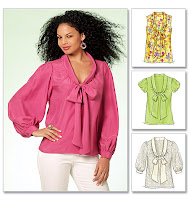 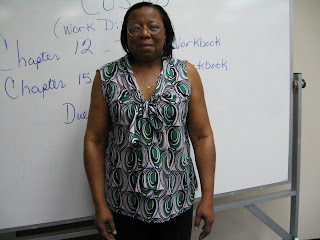 This top went together easily, and was a nice one day project - which I need some times. I didn't have enough fabric to cut the collar/tie on the bias, but I had no problems getting it attached properly. I also liked the self fabric bias cut facing for the armholes. I really like the style, but was surprised at the amount of designer ease in the pattern. I think I would like to make this pattern up again - maybe one of the sleeved versions, but I think I'd remove just a little of the ease.