....In my ongoing effort to make my fashions look more professional, I incorporated this RTW Style Zipper Facing Application that was mentioned by Erica Bunker in her recent interview on the Blue Gardenia Blog.  You can find that tutorial here.

When I first looked at the tutorial it seemed easy enough to pull off.  But I just could not figure out how to make it work with a lapped Zipper.  After concluding that this wouldn't be so easy after-all, I stored the link for future reference.  But something pulled me back for a second look.  This time I actually READ the instructions, rather than READING the pictures, if you get my drift.  (I'm quite often guilty of doing that).  I discovered that it was meant to be used with an invisible  zipper rather than the lapped type (DUH!).

Last Monday I had made up my mind that 2011 is high time to make installing invisible zippers "Second Nature", rather than just using it here and there.  Hancock's had a 30% off sale on zippers so I picked up a few. 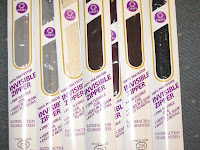 I figured that forcing myself to install them one right after the other I could finally get them done without second guessing.  So that is what I've worked on for the last day and a half.  After installing and removing  a zipper in my current project, I think I've finally settled on this video to clarify instructions.  Using this method the zipper went in with ease.     QUESTION:  Has anyone heard of or know where I could get the "RIGHT SIDED FOOT" mentioned in this video???

Now back to the RTW Zipper Facing:  This little gem helped eliminate bulk that is always created by the facing seam allowance, and solved the question of how to finish the end of the facing rather than just folding it back and whip stitching down. 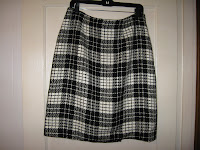 So here's my second finished project of the New Year.  Same McCall's pattern as the last skirt, which I think I'll retire for a while and move on to my Vintage 2011 Sew Along skirt.  I've got the vintage skirt and a dress still weighing heavily on my mind.  School is out tomorrow due to storm warnings, so I have a reprieve of sorts and actually have another day to sew....
at January 10, 2011