I HAVE THREE (3) SKIRT CARNIVAL CONFESSIONS...

...wondering what they are???
I've got skirt fabric pre-washing in preparation of NEW PROJECT SUNDAY  as I speak type.  I'll be adding this colorful knit to the skirt processional using Pamela's Magic Pencil Skirt pattern again. 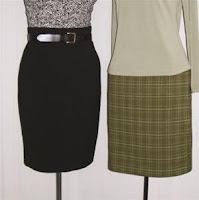 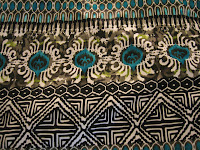 It's been a GREAT sewing weekend as I had a chance to spend the last 3 full days in my newly renovated space.  I didn't produce as much as I would have liked to, but I just enjoyed being in here strategically placing all my sewing stuff.

I wanted to include a picture of my new Carnival addition.  I used Butterick 5566 - think this pattern came out in Fall 2010.  I remember drooling over Carolyn's (DIARY OF A SEWING FANTATIC) skirt using this pattern where she combined a woven fabric with faux leather.  When I emailed her to find out where she purchased the leather, she offered to gift some of hers - so this skirt is compliments of Carolyn.  Of course I didn't get around to making the skirt for a long time - remember I mentioned skirts calling out to me - well this was one of them.  I'd had the leather so long I forgot when it was that she sent it.  I emailed her again yesterday to find out and she said it was March 2011.  I should have at least make the skirt last fall, but oh well... 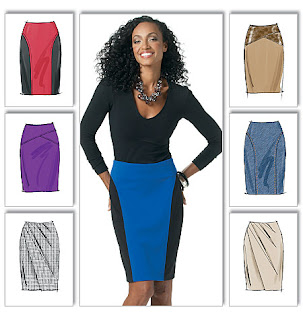 My skirt was made using a black wool with the patterned faux leather.  I am sooo happy with the outcome! 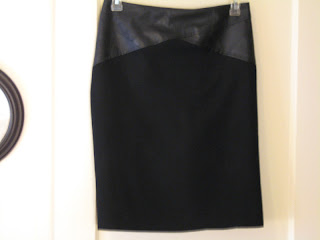 I have a plan to show off my collection that will be coming up very soon - so be on the look out o.k.  I'm planning on making the Pamela skirt now and then move on to a dress that started calling out to me today, but who knows?????

WHAT SEWING PROJECTS ARE CALLING OUT TO YOU?????

Email ThisBlogThis!Share to TwitterShare to FacebookShare to Pinterest
Labels: BUTTERICK 5566, CARNIVAL OF SKIRTS 2012