...don't always end up as predicted.  Maybe I should stop predicting time frames - but I just can't seem to help myself.  I always think I can get projects completed quick/fast/and in a hurry.  But as it turns out, times speeds by - but I don't.  I am such a slowwwwwww sewer. I guess if it were not for blog reading, Pinterest pinning and watching a movie or two or three, I'd sew a WHOLE lot faster.  But, alas, those are the things that make my leisurely Saturday sewing sessions so very relaxing.


As I mentioned last post, today's project was finishing up McCall's 3830 TNT pencil skirt for my Mother. I hand stitched the hem, the lining to the zipper, made french tacks at the side seams, and tacked the facing down (so she needn't have to bother with the facing flipping out on her).  Hand stitching lends itself beautifully to movie watching don't you know.  The invisible zipper went in without a glitch.  I'd searched high and low for a completely understandable zipper tutorial and finally found one.  May I say again - THE COLETTE ZIPPER TUTORIAL is FABULOUS!

I know there are lots of people who have no problem with invisible zippers whatsoever; but for those who may still be struggling with them, here are two points that make this tutorial work so well for me:
Utilizing this information I've incorporated two additional points: 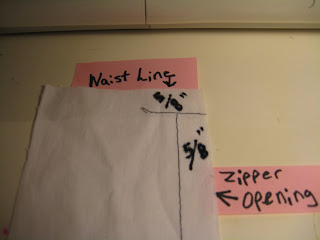 Now I know exactly where the zipper starts, and that the zipper teeth are placed right on the seam line (about a 1/4") from edge of the seam edge.

So here's the pencil skirt for my Mother.  Same fabric that I used to make one for myself a couple of months ago - her's is just longer cause she likes it that way.
I originally planned to make two skirts in a production line manner, but it didn't work out that way.  I've already got the zipper installed in the second skirt, so now I need to finish it up.  I figured a black wool skirt would be a great basic for my closet...
at January 28, 2012