HAPPY BIRTHDAY TO MY SKIRT...A REAL LABOR OF LOVE

....have you EVER seen a sewist make such a ruckus over a skirt???  It's so rare that I find sewing inspiration that really IGNITES passion, but when I do,it becomes a real OBSESSION.  I get sooooo excited when it happens and I immediately set out to make it happen.  And not just that, I show it to EVERYONE, talk about it endlessly (to the point where it probably makes them nauseous), and even offer to make one for them too.  I know crazy - right!

After one failed attempt (posted here) I attacked the project again early Saturday morning.  I started all over from scratch.  I had to re-draft the front of the pattern and cut it up for color blocking.  I picked the first skirt apart in an effort to salvage as much of the original fabric as possible.  I salvaged the entire back of the skirt, and one big block of gray from the front.  I re-cut the back to a smaller size (zipper had already been installed).  After a full day's labor of love my skirt is finished, and I am so happy with it.  Here are some pictures of my process. 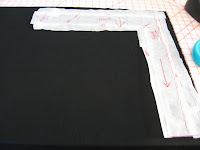 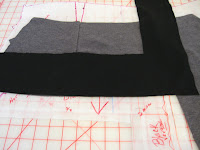 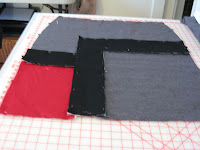 Here is an un-adorned picture of my second Carnival of Skirts Sew-a-long project.  I've ordered a red twinset and black booties to complete the inspiration look so I will be taking more pictures wearing it later. 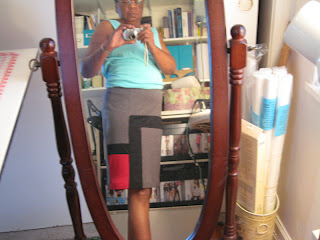 It's been a fun skirt ride for me since September 5th, and although I've got more than enough skirts there are still 3 or 4 left on my inspiration board that I'd like to attack.  You just might see me working on one of them before too long.  I've completed my 2 skirt quota for the Sew-a-Long but now this dress calling my name. 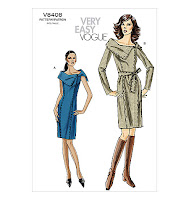 It's a pattern I used a long time ago but I still so love my dress.  I'll be making some alterations to the pattern this time to close up the neckline just a little bit.  This time I'll be making it in black...