...i had always dreamed of adding an interview feature to Faye's Sewing Adventure.  Participating in the BlogLikeCrazy 2015 Challenge helped me gather the courage to reach out to other sewing bloggers to make this happen.  Reaching out can be scary sometimes ya'll.  There is always a little fear of rejection lurking in the background.  But, you never know unless you ask - right?.  So courage gathered, I finally reached out and the results were wonderful!

I've kept in touch with the ladies I interviewed last November by following their blogs, FaceBook pages, and on Instagram.   It's been an interesting year for all of us that has involved much growth, many yards of fabric sewn, and all is still well in sewing blogger land.  This year I'm borrowing a theme from Oprah Winfrey called "Where are they now???", because I thought you'd be interested in knowing.

"Conversation with a Real Georgia Peach (Run Grab a Cup of Tea)" November 2015
featured Alethia Hudson formerly of Sew Much Talent.  Alethia has a brand new blog - SewAlethia
and has built quite a Periscope presence.  She is one of three administrators of the Pericrafters FaceBook Group,  the administrator of the Sew Much Talent FaceBook Group which hosts monthly sewing and crafting challenges, and the co-host of That Sewing Blab  found on www.crowdcast.io. 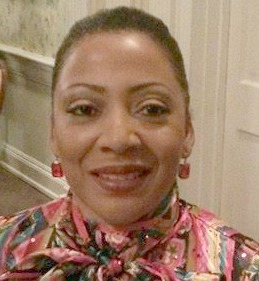 I asked Alethia the following questions to bring us up to date on her sewing process:


Have you learned or are you using any new sewing techniques?  If so, what?
Alethia:   Designing, draping, and creating patterns for my own designs is what I want to focus on more this year. The October Thrift Store Challenge was just the boost I needed to point me in that direction.

What are your MUST HAVE items to make for the Fall/Winter season?
Alethia: Must haves this year?  I'm having visions of several jumpsuits. I have purchased several patterns, and I've already begun to paid them with fabric I already have.

What sewing pattern(s) are you most excited about right now?


Alethia:   Sewing patterns?  I really seem to gravitate towards the New Look patterns. However, I want to incorporate more Indy patterns like Closet Case Files. I have got to get the Ginger jeans made.  And, as I've mentioned above, I will be creating more of my own patterns bringing my designs to life. In the past I did a lot of frankenpatterning to get the look I want. Now, it's time to step it up!

That's quite a bit going on folks!, and there is always so much more.  Be sure to tune into Alethia's sewing world on the platforms listed above...
at November 05, 2016

Email ThisBlogThis!Share to TwitterShare to FacebookShare to Pinterest
Labels: #BloglikeCrazy 2016, Alethia Hudson, Where Are They Now