ENDING WITH A TWIST...

Although November flew by it proved to be a wonderfully productive sewing month for me again. I wanted to end this years Month of Tops sew-a-long with a twist - another twisted neckband tee. The knit I worked on with my TNT pattern New Look 6735, is a light weight poly knit so I came up with idea of doubling the twisted neckband as a contrast. Initally I started with a neckband cut on the fold and folded in half, but I thought it was too light weight - so I took a chance and doubled the fabric. I actually like the contrast in weight of the neckline versus the body of the garment. I also like the look of the twisted neckline on a solid fabric. 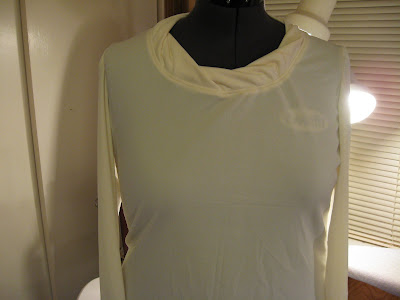 I know that I will probably make at least two more tops before the year's end, but I will mainly be concentrating on other more structured sewing projects in December. The Month of Tops was a good project to take on after making the Chanel Jacket. The Chanel Jacket was a good project to take on after not being able to sew in August and September because I was taking those two classes. MY GOD, HAVE I ( S-T-R-E-T-C-H-E-D THIS YEAR), and have come such a long, long way in my sewing adventure since starting to sew again in September 2006!!! Many thanks to all who have watched my progress...
at November 30, 2009

Email ThisBlogThis!Share to TwitterShare to FacebookShare to Pinterest
Labels: November: The Month of Tops