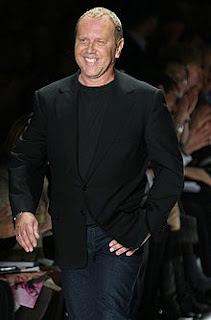 BREAKING NEWS UPDATE:  After a heartfelt speech (no accusations), just a plea for help to me FIND my camera  - it was returned to me at the end of my second class on Friday.  Love is restored, and this just teaches me to be more careful in the future!!!

...Well, I finished my Fearless February project on Sunday evening.  Although I so wanted to post pictures of it then, I waited until I wore it for the first time today.  Now I wish I had taken pictures on the dressform - maybe I'd still have my little baby point and shoot camera!   Yes, you see, my little Cannon Powershot all of a sudden GREW SOME LEGS and took a hike today.  I'm about as mad as that lion in the picture looks right now - but must move on.  So I'll be posting these cell phone shots of my finished project. 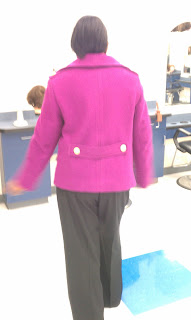 Now for my little summary of the project:
I think that's about all for my summary.  Now it's time to round up all the pattern pieces, get them safely tucked back into their envelope and move on to some of the simpler things of life - like some instant gratification sewing!

Now just a few shout outs and I'll be done.  Thanks to:

Sounds a bit like an Academy Awards acceptance speech!
at February 21, 2013 74 comments:

... NOTE TO READERS:  Heavy Post.  If you don't want to read all of this I understand! Just look at the pictures - it's quite a metamorphosis!

...I started my Fearless February project on January 19th because I knew I needed a head start.  But really, what does it matter - After all I'm not in a speed race.  But I have to continuously remind myself to CHILL and just ENJOY the process of what this project is all about:
I actually do not get in as much sewing time during the week as I would like to.  Lets face it I'm pooped at the end of the day.  Sewing a little on Friday evening and all day on Saturdays has been progressive though.  Had I made this jacket straight by the pattern instructions it would have been finished by now.   But it wouldn't be as special as it's going to be after plugging numerous tailoring techniques into it.

There have been other eyes (people) involved in this process.  My sister Pat and my niece Brenda came for a visit at the beginning of the muslin fitting stage.  They helped me critique my fit as much as they could but most importantly took pictures of the back of the muslin while I was wearing it.  I emailed the picture to Smoking Needles, who suggested that the sleeves needed to be raised because they extended far too much over my natural shoulder; and that it was too big in the chest area.  And after studying this picture I also knew that I also needed to make a sway back alteration.

Eight pairs of eyes lead to a much better fitting muslin,  but it was at this point that I was almost ready to throw in the towel because I really wasn't sure how to go about raising the sleeves or taking the excess fullness out of the chest area.  But instead I took a deep breath and decided to press on.  After all, it's not a Challenge unless it's a Challenge, RIGHT???

My corrections made for a much better fit. You can see from the picture that even on the dressform it was too large in the lower armhole area.  I could have taken the excess out of the side seams, but nooooo, I had already jumped the gun and completely installed all 3 pocket flaps (lining, topstitching and superb pressing).  There was no way I was taking them off because as far as I was concerned they were PERFECT!  Taking up the side seam would have thrown my pocket flap alignment off.  So instead I decided to make the adjustment in the back princess seams, which I think worked out very well. 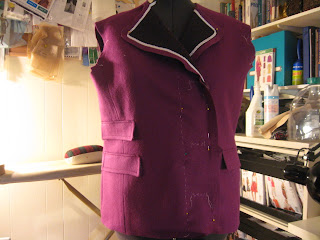 I insert the majority of my sleeves flat before the side seams are sewn.  I JUST LOVE THAT METHOD OF CONSTRUCTION!  But of course this jacket has a two piece sleeve so there was no way around setting it in.  If anyone out there knows a way to sew a two piece sleeve in flat, please let me know!
The sleeves were the #1 area that caused me fear - I'm a-scared (new made up word) of sleeve cap puckering.  I received advise from two different sources and help from a video tutorial.  Ebony said that although pattern instructions tell you to ease the sleeve cap between the notches, instead start your easing far beyond the notches.  This was good advice, except it was impossible to pull up the ease stitches in this thick fabric!  I used three rows of ease stitches and it wouldn't budge.  It was now time to pull another weapon from the arsenal - the bias strip sleeve cap easing method.  I'd used it before a long time ago and used this You Tube Video as a refresher.  It worked like a charm!

With the sleeve cap eased, I still needed to get the sleeves inserted flawlessly.  It was then that I heard Rochelle's voice in my head from a previous conversation say, "have you ever thought about hand basting the sleeve in first?".  Let me tell you, that really did the trick.
I am extremely pleased with my project at this point, but still not completely out of  woods.  The pattern calls for 1/2" shoulder pads, but I'm not sure that will be enough.  I'm toying with making headers for the sleeves.

When I get to this point of a big project I make a list of what's left to do.   I guess it helps me feel like I'm moving and making some progress.

It's been rough sewing this thick wool fabric.  I had to pull out the big guns to get this done.

I purchased this machine about four years ago at Hancock's used machine sale for $35.00; all it needed was a needle thumb screw.  I use it for "hard" to sew fabrics and boots so it rarely sees the light of day.  But I'm discovering that I really like it.  No bells or whistles on this machine at all but it purrs like a kitten.

In the meantime, I was one of Brenda's pattern give-a-way winners.  Thank you again Brenda!

To end this short novel of a post I must show a couple of pictures of my students.  We participated in the Veteran's High School Prom Fashion Show for the second year in row and they did marvelously.

I'd love to tackle two big projects during Fearless - February (F-F) that have been on my sewing back burner for a very long time.  But since I sew much faster in my mind than I do in reality, I think I'd better concentrate on just one of them for starters.  No need in boggling my mind anymore than necessary.- right?

a pattern that I've had for a long, long time.  I've often wanted to make it, but was fearful that I'd be able to pull it off.  Why fearful? - I really don't know - just fearful.   But when I saw the jacket made by Erica and then by Lori, I was ready to kick fear to the curb and go with what my Grandmother taught me - that being "NOTHING BEATS A TRY".

Last week I chronicled some of my progress, but the project actually started the week before with the preparation of the fabric.  Lori mentioned that she had washed her wool blend fabric by accident; I washed mine on purpose.  I'd had the fabric four or more years - gifted by my fabulous friend Ebony; but it felt stiff as though it contained some sort of sizing so I decided to wash it.  I pre-measured and found that I had 9 inches to play with.  After laundering in warm water (yes I know it was risky), and drying on medium I was left with a much softer piece of fabric and only 2 inches to spare.  Thank goodness I still had enough for my pattern pieces even after lengthening the body of the jacket 2".

Friday evening was spent removing a great deal of the fusible tricot interfacing that I felt made the jacket too stiff.  On Saturday I rolled out of bed and rolled into the sewing room where I spent the ENTIRE day working.  Got the lapel and collar taped and padded using that wonderful serpentine stitch that Erica mentioned.  WHAT A TIME SAVER!!! 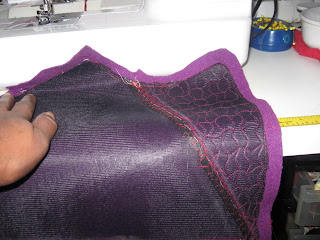 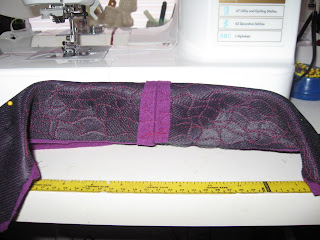 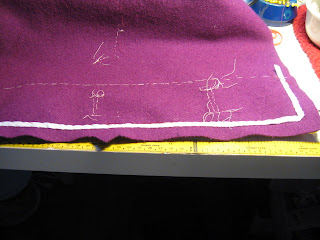 and finally got it to resemble a jacket.  Funny thing though, I got the muslin to fit just fine, but found the jacket to be a tad too large - go figure!  Especially since I'd already jumped the gun by finishing  and stitching the pocket flaps on - which by the way I'm NOT going to remove.  I'll just make a fit adjustment in the back princess seams.

Now comes the scary part - attaching the collar and inserting the sleeves - uncharted territory.  I'm taking a deep breath and I'll use the following quote and a prayer to see me through... 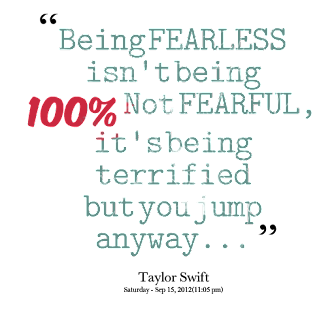