PRAISE GOD IT'S OVER...Well Almost Over

I took my BIG test today - the one I've been studying for the past 4 months. Studying instead Sewing! I kept telling myself, "just put the sewing down until after the test". And sewing wasn't the only thing I put down - seems like everything else got put down too. During the last 4 months whenever I did do something that was somewhat fun I FELT GUILTY! Guilty feelings cause STRESS, studying caused STRESS, stress, stress. I took my 2 part test today that involved being at the test site 8 1/2 hours (including hurry up and wait time - which there was plenty of). I'm say it's almost over because I don't get my results until next Monday. I pray to God I did well, cause I certainly don't want to take that thing again.

Hopefully I'll be sewing more, blogging more (instead of just lurking), and going back to the gym. All promises I've made to myself now that I have my life back.
at October 29, 2007 4 comments:

STILL LEARNING FROM OTHERS

Last night I had a chance to listen to a podcast interview with Cidell done by Trinilove at http://www.trinilove.typepad.com/. I was reading Cidell's most recent post at http://www.missceliespants.blogspot.com/ that had mentioned the interview so since I check out her blog several times a week I thought it would be nice to be able to listen to her voice. It was quite an interesting interview - but then I knew it would be even before I listened in. I had read another post on her blog recently where she told how she began sewing in junior high school and this interview went right along with that post. The things that motivated sewing experience really brought back memories of my own, and although different, very similar in so many ways.

She had grandparents who sewed, and although her mother didn't partake in this particular craft, she encouraged her daughter's passion for sewing by purchasing her a sewing machine at an early age. Similarly in my case, I had an aunt who I am told designed and sewed but I never had a chance to meet her since she passed on when I was very young. But I did have a great-grand mother who loved to sew, quilt and embroider and from her I caught the sewing bug when I was very young. I watched my Granny sew hours on end (especially on rainy days when she couldn't do yard work). I sat by her side and threaded the needle on her Singer treadle sewing machine which she forbade me to touch. Who was she kidding? No sooner than her back was turned I was on that thing. I remember breaking the belt on the machine because I couldn't get the hang of making it go forward in a smooth method; I also broke a pair of her glasses and was spanked (at the time I called it being BEAT) for both offences. I was punished, but not deterred.

I also had an aunt made the most beautiful garments for herself and her daughter. I even asked her for sewing assistance once I started taking Home Ec, but her patience was not long enough to do anything but frustrate me. I remember saying to myself, "you just wait and see, I will be a better seamstress than you one day". When I finally did get pretty good with my sewing it was her calling me for assistance (sweet revenge - lol).

I think I remember Cidell mentioning during her interview that there was a period of time that she didn't sew, but later picked it up again. Another similarity, because I stopped sewing for about 13 years and have picked it back up again. So there is hope for me. I really helps when you find out that others have had struggles like you that they overcame.

I also listened to a podcast interview at http://www.adrienneslittleworld.typepad.com/ on Erica from http://www.ericiabunker.com/. I think I first found out about Erica from Carolyn's blog at http://www.diaryofasewingfanatic.blogspot.com/. (Found out about Carolyn at http://www.artisanssquare.com/.) I had been lurking around Ericia's blog as well as Carolyn's since January of this year. I'd even emailed Erica with questions and she promptly answered me back, so it was really nice to be able to hear her voice too since I felt like I already knew her anyway. Found out about Adrienne on Erica's blog and now I am getting to hear her voice too since she is doing a weekly video spot on her blog now. Adrienne I haven't missed a show yet, he he he and I'm loving them. Adrienne has recently shared her sewing library list with me - Thanks Adrienne! As you can see this is quite a sewing circle; you find one good site and it leads you to another then another. I have learned so very much from the ladies I have mentioned here and it brought to mind a saying that I have often heard - WHEN THE STUDENT IS READY - THE TEACHER WILL APPEAR. And they really have. When I was ready to start sewing again a year ago, I jumped on the Internet and searched out information and the Teachers appeared! These young ladies are sooooo talented! Not stuck up but sharing. So just so you know ladies I am watching, and I am learning from you and being inspired by you. (Although I still have not been brave enough to order that Burda Magazine. For right now I've decided to work on these patterns from the big 4 for a while longer - still getting my feet wet so maybe I will order it later. Another blog that I've been looking in on cause this girl can really sew too is http://www.themahoganystilist.blogspot.com/.

I've been slowing building my fabric and pattern stash, and will be able to really get back into sewing, fitting, designing again around the first of November. Until then I'M STILL LOOKING AT AND LEARNING FROM OTHERS!

Doesn't Take Much to Get Me Excited

I finally got around to asking a friend to help me take my measurements accurately. I had been planning on doing this for a while, but just kept putting it off. I called her before I left work today and although she was baking a wedding cake and grooms cake for this coming Saturday, she said that she had time for me to stop by...and so I did. She even let me use two of her sewing books (like I needed another one), but I do like one of them - Singer 101 Sewing Secrets.

I have been studying Nancy Zieman's Fitting Finesse which is easy to understand and makes a lot of sense to me. 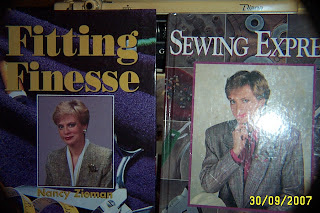 I am particularily interested in learning to fit pants properly. The problem I currently have is that if I get the pants to fit in the waist, the hips are way to large and the crouch sags, and neither is very comfortable or attractive. According to this book the solution is to pick my pattern size according to my hip size (size 16) then alter the pattern to fit my waist (size 18) adding the suggested ease. I had taken all of the measurements that I could comfortably take by myself, but of course needed help with others. So I took the book with me when I stopped by my friend's house this afternoon and she took all of the measurements for me as suggested by Nancy's book.

I am hoping that I am smart enough to follow the information in the book and finally come up with a TNT pants pattern or patterns that will help me MAKE PANTS THAT REALLY FIT!!! Now I can already see where my sagging crouch problem comes from. My crouch measurement is close to 4 inches shorter than the pattern so to fix that would really help. Of course I will be making a muslin before I cut my fashion fabric and will post results when it is done.

One of My New Loves - Yummo

My baby sister suggested that I include one of my recipies on my blog every now and then. Thought I might share this one for a new love of mine - Iced Coffee Latte. Before this past summer I had heard of Iced Coffee but could not imagine liking it at all. I finally tried one from Burger King called an iced Mocha Joe and it was LOVE AT FIRST SIP!!! Stopping by to pick one up every morning turned out to be quite costly so I decided to try and make my own. After several failed attempts to make up my own recipe I found this one on another blog. I'd like to give that lady credit for the recipe, but cannot remember which blog I saw it on. Anyway it is really good.

Mix instant coffee with boiling water until dissolved. Mix in the remaining ingredients and serve over ice. It makes a whole pitcher full so just store it in the fridge.

Email ThisBlogThis!Share to TwitterShare to FacebookShare to Pinterest
Labels: Recipies

I JUST HAD TO SEW SOMETHING!!!

In my post yesterday I mentioned that I made a nightshirt a couple of weeks ago. I hadn't sewn anything since I think June because of giving myself time to get adjusted to my new job. But the time had come and I felt that I JUST HAD TO SEW SOMETHING!!! Mine you, since starting to sew again last September my stash has not grown very big but I was able to find a piece of fabric that I think is pique that I purchased this past summer. It really didn't matter what the fabric was at the time, I just wanted to SEW SOMETHING! So I made this nightshirt and I wanted to post a picture of it here. 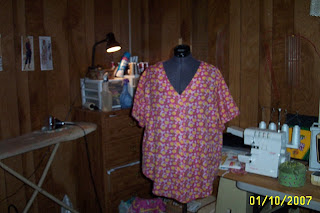 My next project is already cut out, waiting for the time to come when I JUST HAVE TO SEW SOMETHING!