...block, sloper whatever it's called, I want one and am determined to create one.  Other than a pant's muslin that I made here, I haven't worked on my TNT pant's pattern since maybe early 2015 or late 2014. Consequently, I find myself needing new pants.  I kept telling myself that I needed to venture into new pants pattern territory - after all, I have so many new ones in my stash.  After spending an enormous amount of time trying to decide just what new pattern to use, I've decided to go back and tweak my TNT, rather than spending time totally reinventing the wheel.  I pulled the pattern out and made a few more adjustments according to newly acquired information before cutting out a pair to work on during the course of the week. 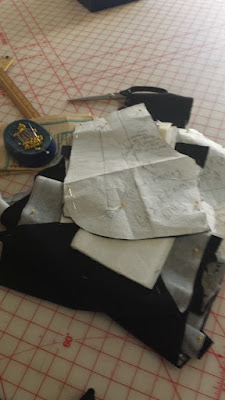 I'm hoping to get an even better fit this time.  Keeping my fingers crossed, because I am really ready to commit this pattern to tag or something similar.  I want this TNT pattern to finally become my  block/sloper so it can be used to judge and adjust other new pants patterns.

In the meantime, I'm declaring today as sewing machine cleaning and maintenance day following SheilaCTK's lead.  I have to admit that mine are long overdue for cleaning.   Who's next...
at August 14, 2016 13 comments:

...which paper do you use in your sewing room