...raise your hand if you have an animal print fabric in your stash (specifically a knit). I remember
animal print fabrics being really hot a few years ago, I just don't see them being used as much as before.  Back then there were so many different knit ones - for some the animal they mimicked were almost unidentifiable - like the one I  pulled out of the stash this week to use as a muslin.  I must have really adored the fabric when I purchased it because after using 2 1/4 yards for this top, I still have 2  yards left.

When using a pattern for the first time I quite often forget to check out "Pattern Review" to see what others have experienced, but with McCall's 7249 I remembered to do that and it was well worth my time. 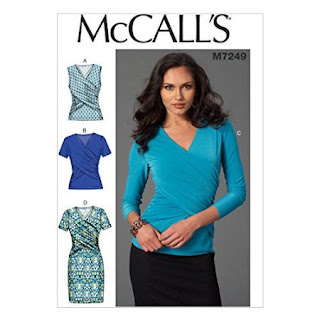 Reviewers spoke the absolute truth - the pattern is truly a puzzle.  With reviews like this I normally say, "never mind" and put the pattern neatly back in the drawer.  But since I've had the pattern for a while and was still very attracted to it, I decided to give it a go first as a muslin.  I cut on Tuesday, worked on it a little each day, finished it tonight, and yes indeed it was truly a puzzle.  Reviewers said that the pattern ran large, but I did not find that to be so. 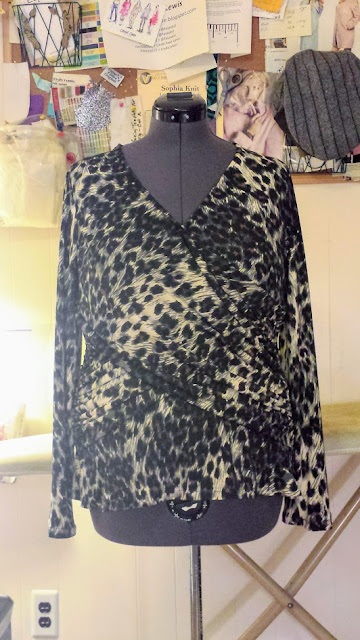 MY SYNOPSIS OF THE PROJECT:
Did I make changes to the pattern?  Yes. I used a rectangular fabric strip to create a back neck facing rather than turn under and stitch which I like much better.  I tacked down the overlay facings to prevent them from flipping outward.
Will I wear this muslin?  Yes I will
Will I make the pattern again?  Probably not.  Original plans were to make the muslin, then if I liked it enough, use the pattern for my black ITY knit.  Although I'll wear the muslin, I don't think the pattern is worthy of my (hard to come by for my area) black ITY; and it involved a bit too much work for a knit top.

...how does one make a 16 piece wardrobe capsule? - One garment at a time.  I reached way back in my pattern collection and fabric stash for my third piece of the capsule.  This time I retrieved OOP Vogue 8323 and a deep chocolate ITY knit - both of which have been in my stash collections for eons. 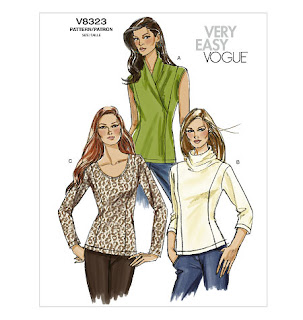 I made View C in this same chocolate ITY knit long ago when I was just starting to sew again.  That was back when I was very unsure of pattern sizing and still having problems accepting the fact that my RTW size and pattern size quite often did not correlate.  On the flip side, that was when I was (and sometimes still am) unsure of sizing - so I would often cut a larger size just to make sure.  That top ended up being way too large through the neck and bust area, not to mention really too low cut for my taste. That top has long been discarded. 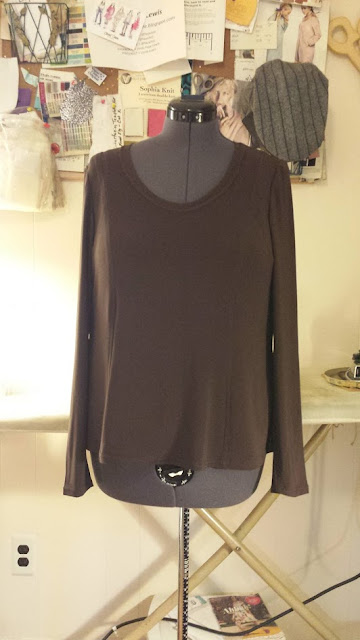 This time I raised the neckline 1 1/2", cut size 16 through the neckline and bust area and graded to size 18 through the waist and high hip area.  I also increased the princess seam - seam allowance in the bust area for a much better fit.  This top has princess seaming on both the front and back that I stitched down afterwards.  Rather than add bias tape to finish the neckline, I used a 1 3/8" wide self fabric strip for finishing.  I cannot stand bias tape around my neck.  I also used a twin needle on the neckline and bottom and sleeve hems.  I'm glad to finally get around to replacing my Chocolate ITY knit top.  The princess seaming adds  great fit detail. 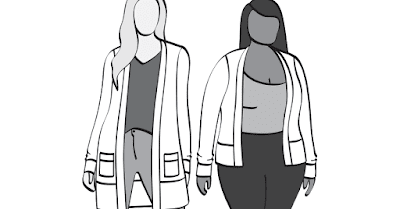 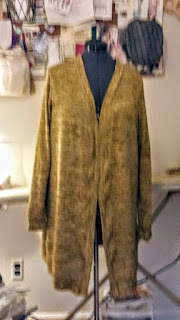 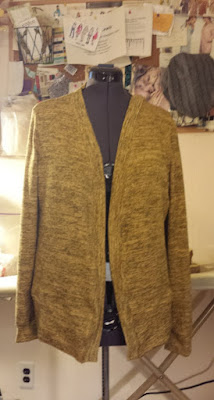 ...it seems that I have neglected my blog.  But you know me better than that - it wasn't neglect at all but rather - circumstances.  We had the aftermath of Hurricane Irma that not only knocked out my power for three days, but also the data disk that held 2 years worth of saved documents and pictures.  Then the stressful busyness of work played it's part.  And finally the fact that my sewing motivation just up and flew away with Irma.

Finally after much coxing just a little bit of the motivation has returned, and now it's time for me to get back to my Fall Sweet 16 sewing plans that I talked about here at the end of August.  My plans were not rigid or stressful, just a simple 16 piece capsule that would define my personal style for the upcoming Fall/Winter Season: 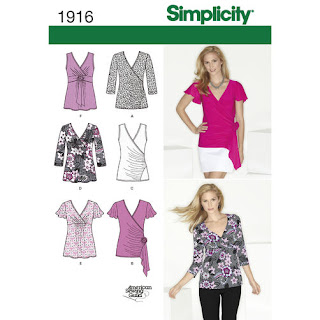 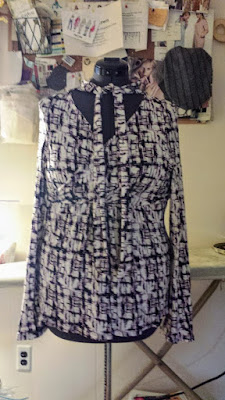 I made a Modified version of View D with this TNT pattern. I added a choker tie to the surplice bodice; and changed the 3/4 length sleeve to an over exaggerated full length with a bell shape at the hem.  I remember buying this purple and white jersey knit from JoAnn's.  The printed selvage edge noted April Johnson 2010.  Do you remember April of Savannah from Project Runway Season 8 in 2010.  Do you think 7 years was long enough to let this fabric marinate?